For the third year in a row, a hedgehog survey has been searching for this elusive little mammal in Fingle Woods. As the habitat is steadily improving, we are hoping to see a similar improvement in their numbers in the more suitable parts of the woods, and a footprint survey is considered to be the most reliable way to find out.
Numbers of hedgehogs are rapidly falling in the UK, though the reasons are not fully confirmed it is, according to the Mammal Society, likely to be a combination of factors. They say that “Hedgehogs appear to be in decline and the total population is unknown. The biggest threat to hedgehogs is thought to be habitat loss … the removal of hedgerows … the use of chemicals … that kill the creatures hedgehogs need for food and may also poison them directly. Many are also killed on the roads.” The Mammal Society estimated that Britain’s hedgehog population may have decreased by as much as 73% in the last twenty years.

Learning from previous years, the footprint tunnels were set up again in some of the most likely spots including along woodland edges, where habitat piles have been created, near neighbours’ gardens and where the occasional hedgehog had been found in earlier surveys. For a consistent and comparative survey, the monitoring areas should be repeated every year at the same time and in the same places as much as possible.
Hedgehog footprint tunnels are a simple structure comprising a plastic tunnel containing a sliding insert with a sheet of white paper attached next to a pad covered in a sticky mixture of charcoal and edible oil … and this is what we have set up with the help of a few Fingle volunteers. The anticipation of finding prints from these twinkle-toed woodland wanderers is palpable each time a footprint tunnel is inspected but the sense that they are getting quite rare in the woods is a little disheartening. Even though there are very few in Fingle Woods, we remain optimistic as the gradual transition from a purely coniferous woodland to one with a more deciduous appearance should suit them well in the longer term. Maybe it’s a matter of time.

Setting out these tunnels does give us an indication of the other small mammal species in the woods and, as an approximate measure, shows us the level of activity of voles and mice in particular. In spite of a sad lack of hedgehogs, this year has shown us that wood mice, bank voles and field voles are doing well. It is assumed that they have made a recovery from low numbers in the unusually cold Spring. This is a similar pattern that we have seen from the dormouse monitoring in the woods. As we search for dormice, we often see evidence of these other woodland mammals and can work out whether they have had a successful year. Dormice are sadly much slower at recovering and rebuilding their numbers after a difficult breeding season, which is one of the reasons they are another mammal on the decline.

Woodmice leave a lot of evidence of their presence

As both hedgehogs and dormice are hibernators, an additional reason for their perpetual struggle is more than likely to be Climate Change. During winter, hibernators are often observed to be active when food is scarce during unpredictable weather and mild periods. This unnecessary use of energy results in a loss of stored body fat and adds an additional threat to our woodland mammals.

While we continue efforts to reduce atmospheric carbon and lessen the effects of Climate Change, we can continue to help in other ways. As the habitat improves at Fingle with more natural cover, we offer protection and increase diversity within a mixed habitat – not just conifer. This also may be the right time to bring in some rescued hedgehogs from those who lovingly give their time to rehabilitate hogs in peril. The survey will continue and the habitat will be improved further and we hope to see that Fingle can make a transition from the lower biodiversity conifer woods to a richer hedgehog haven.

The kingdom under the woods

The Little Fellers of Fingle Woods

This site uses Akismet to reduce spam. Learn how your comment data is processed. 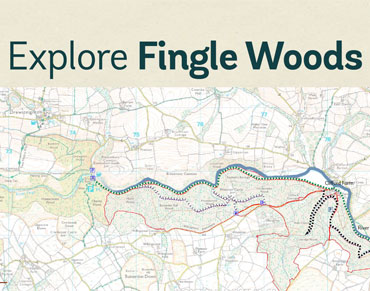 Receive email notifications from us whenever a new post is published!